Bonnie Holm Photos ~  Thanks Bonnie for joining us and for covering the event with your great pic's!

Thanks for sharing your pic's

Thanks for sharing John

Scroll to bottom to see all.

Robert Luppi Photos   ~  Thanks Bob, for joining us for the day and for sharing these pic's!

If anyone who attended has pictures they would like posted on this page, just post them on our Fort Shaw 150th Anniversary Celebration page on Facebook with a note that you'd like to add them here.

WOW, WE HAD A BLAST!

Our sincere thanks to the hundreds of folks who came out Sunday, August 13, 2017 to celebrate the 150th anniversary of Fort Shaw, built in Montana Territory in 1867.  The turnout was astounding.  Your continued support of restoration and preservation of “Fort Shaw, the “Queen of Montana Military Forts” is appreciated.

Our opening ceremony kicked off with a fly-over by a Montana Air National Guard C-130, setting the stage for an exciting day.  Narrators and re-enactors were in every building and tent on the grounds.  More soldiers in the 1800’s era uniforms, than this old fort had seen in 140 years.  Mule drawn trolley rides to the newly refurbished cemetery, thanks to the Carter family, were a big hit.  Folks enjoyed typical army fare of bean soup and cornbread with dessert of pie and coffee, and visiting the Sutler Store, which did a thriving business.

Our THANKS, go out to all volunteers who made this day possible.  To Wad, Don B, Don E, John, Kermit, Rita, Earl, Ida, Dick, Bob, Jim, Shawn, Kae, Pat, Dianne, Larry G, Larry D, Ina Mae, Jan, Jerry, Carol Ann, Bonnie, Ken, Marie, Leah, all the donors, the ladies of the two Home Demonstration Clubs, the Sun River School District and great Staff, as well as to the Boy Scouts Troop 1010, the Fire Dept. for standing by, and the many others who helped over the past year in so many ways and to those who came out Sunday to add their help.  Special thanks to all the reenactors and participants.  Our apologies and thanks to anyone whom we may have missed.

We dedicated the Memory Tower to the Soldiers and all residents of Sun River Valley and state of Montana.  One wall is complete, with bricks on sale for the remaining walls. Thanks to the purchasers on Sunday. 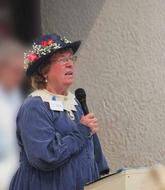 See our preparation for this event on our Fort Shaw 150th Celebration page and our Repair and Preservation page. See menu above.

What a wonderful day.  The tremendous turnout by an absolutely wonderful crowd exceeded our greatest expectations.  Huge thanks to all who attended, who wanted to attend and couldn't and to all involved. We had so many donors, volunteers, participants and the great leadership of event chair Sue Williams and her husband Wad, and of Society President Burnette Batista and her husband Don.  They've been out to the Fort on almost a daily basis for months.